Since the iPad was first unveiled in 2010, the tablet PC market has rocketed. Different companies have tried to mimic Apple’s innovative design and user friendly interface, but at a luxury cost. In the last year, affordable tablets have started to appear, usually running the Android engine (Which is also found in their TV dongles, which can be found at Visopix). We take a look at the best of these affordable tablets, the Google Nexus 7 and the Amazon Kindle Fire.

The Nexus 7 is a robust little tablet. When you hold it in your hand you can feel the quality of the build, as opposed to other affordable tablets on the market.  After a few months of use, the tablet still looks brand-spanking new – which is a surprise for a black plastic case. The screen has held up to some punishment without even a tiny scratch. Also, when it does eventually become a bit worse for wear, the low price means that it can easily be replaced without eating a large chunk of the bank balance.

In terms of matching up to Apple, the Nexus 7 does its best with the resources it has. The Google Play Store is a massive weapon in the tablet’s arsenal. With over 700,000 apps and counting, it’s a good bet that you will find an app or game for your needs.

The gyroscope and accelerometer mean that the Nexus 7 is definitely a fun tablet to own. Google boast that the tablet is designed with gaming in mind and, with some games, this certainly is the case. With the higher end games in the Play Store, tilting and tapping the screen frantically is the norm. And yes, you can do a barrel roll.

The 32GB storage is plenty for most people, but the absence of a microSD slot does mean that you are locked in to whatever storage you happen to buy. No upgradeable hard drives here.

The display, while robust, does let the tablet down a tad, especially when watching movies. The contrast is a little disappointing for such an otherwise pristine screen. 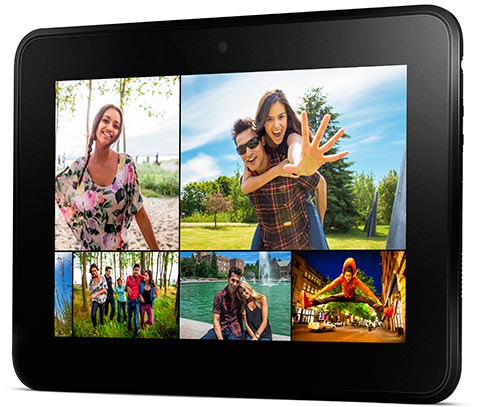 The most noticeable difference between the Nexus 7 and the Kindle Fire HD is the superior display of the Kindle. Colours are bright, images are sharp and the motion doesn’t blur when there is a lot of movement on screen. This makes the Kindle Fire HD a great tablet for watching movies on, especially with the various movie streaming companies out there now.

With the big name of Dolby behind them, the stereo speakers really do pack a decent wallop for such a small device – definitely a benefit when watching movies without headphones.

The sheer choice of ebooks, movies and apps makes the Kindle Fire HD stand out. With all Amazon content being stored for free on their Cloud service, it really is a media rich forest to pluck fruit from.

The tablet does feel a little sluggish when navigating its interface and makes fundamental utilities, like e-mail, a headache to use.

When stacked up against Apple and Google, Amazon has nowhere near the number and quality of apps on their market. This is disappointing to say the least.

These two are the most affordable tablet devices in the market today. If you own one or both of these devices, what will be your choice of device and why?