Smartwatches have been around for awhile but things haven’t been evolving at a brisk pace when it comes to new and innovative ones. The Moto 360 dominated the scene for awhile until the LG Watch Urbane stole the thunder. The Asus Zenwatch is another stylish watch that makes for a good buy.

But with the holiday season not too far away, there’s bound to be more updates and upgrades to smartwatches plus new ones to look out for. This post takes a look at some of the most recent announcements made in this regard. Here are the latest Android smartwatches to watch out for in the last quarter of 2015.

Best Android Smartwatches to Watch Out For (2015 Edition)

LG Electronics (LG) has just provided a sneak peek of the 2nd Edition of the classy LG Watch Urbane. This device is designed for people who want to stay connected to the world always and is the first Android Wear smartwatch to offer cellular connectivity. Users have the option to connect to the Internet via 4G, 3G, Wi-Fi or Bluetooth, making it ideal to carry it when a smartphone is not convenient.

The LG Watch Urbane comes with a 480×480 resolution (highest resolution on any smartwatch currently available) on its 1.38-inch full circle P-OLED display. It has a high-capacity 570mAh battery and Power Saving Mode that should ensure your battery lasts throughout the day.

There are 3 buttons on the right side of the watch gives you quick access to your contacts, LG Health and the Apps list while the crown button lets to turn on/off the Ambient mode. Users have 16 watch faces to choose from along with some cool fitness related features such as stress level monitoring, workout tips and heart rate tracking.

The LG Watch Urbane second Edition will launch first in the United States and Korea, followed by other markets. Details of price and availability will be announced at a later date.

Samsung’s Tizen powered smartwatch, the Gear S2 is all set for launch on October 2nd in the U.S. The Gear S2 is available in two versions; the Sporty standard model costing $299 and the stylish Classic version costing $349.99. This is Samsung’s first round smartwatch and it features a rotating bezel (that will let you scroll through long emails, access a playlist and more) and a touchscreen to navigate the interface. The watch will have a 1.5GB RAM and will be compatible with all devices running Android 4.4 and up. When paired with a Samsung device, plenty of additional features will become available including mobile payments.

Samsung has partnered with Alessandro Mendini to offer a wide range of watch faces and watch bands to suit your personal style. With S Health, you can track and monitor your activity levels, view step counts and measure your caffeine intake. With enough space to store all your favorite playlists, you can sync up to 300 songs from your phone and listen to them with your Level U Bluetooth headphones. You can learn more about the Gear S2 on the official site. 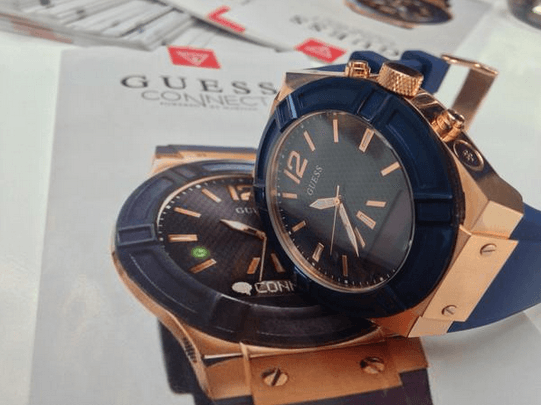 Fashion house Guess has partnered with Martian watches to deliver its first smartwatch. This device will be based on their best selling watch model RIGOR and is designed for the young, adventurous buyer who has a high fashion sense. The watch features dual mode functionality that offers a hands free user experience using voice commands.

Users can customize what notifications they want to receive on the Watch using the free app, create unique vibrations for different alerts and recall the most recent notifications at the tap of the watch glass. This water resistant smartwatch will arrive in October 2015 with prices ranging from $349 to $399.

Users who were hoping for a round watch face in the upgrade will be disappointed as both devices still sport the “flat tyre” at the bottom of the screen. Other specs worth noting include the 1.2GHz quad-core Snapdragon 400, 512MB of RAM, 300mAh battery, and 4GB of internal storage. Pricing for the models range between $299 to $499 and pre-orders can be made of the official site. Motorola also announced a Sport version of its latest Moto 360 smartwatch. The version has a silicone body and a special UV coating to keep off moisture and avoid staining. It comes with a built-in GPS that can track the distance traveled, measure your speed and pace and is integrated with Moto Body to give you all the health data you’ll ever need during your workouts.

Moto 360 Sport also boasts the world’s first hybrid screen, Motorola AnyLight, allowing easy adaptation to natural light so you can read clearly whatever the outdoor conditions are. This isn’t just an exercise accessory, you can also access your Gmail messages and calendar, browse and play music right from your wrist. Pricing and availability details are expected later in the year. The Asus Zenwatch 2 was announced in June but is yet to hit the shelves. When it does, you’ll find it available as a 1.45 inch and a 1.63 inch variant. There will be 3 color choices with nine luxurious interchangeable straps available in trendy colors. You can customize it by creating your own watchface or choosing from over 50 professionally designed ones.

Other notable features of the device includes ZenWatch, which lets you send and receive short messages, emojis, and drawings with your friends and family; Wellness manager, which lets you track your fitness goals, Smart Assistant, which lets you view information using touch or voice commands and the much improved Remote Camera function. You can find more information about the device on the official site. 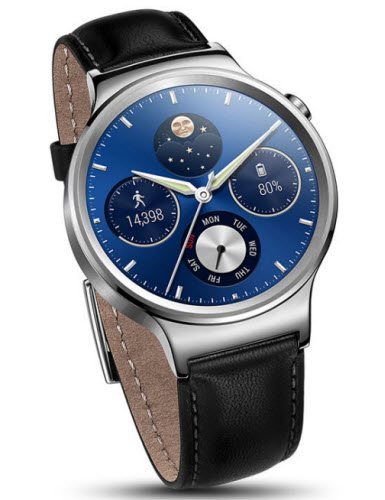 The Huawei Watch gets a premium look this time with a scratch resistant sapphire crystal watchface and metal unibody. It is both Android (5.1) and iOS compatible, has an HD 1.4-inch AMOLED display with 400 x 400 pixels resolution, a Qualcomm 1.2GHz processor, 4GB of storage, 512MB of RAM, 300mAh Li-battery charger that magnetically connects to the watch charging it within 75 minutes; a gyroscope, accelerometer, vibration motor, and heart rate sensor. There’s also support for Wi-Fi and Bluetooth and battery life is expected to last 1.5 days.

Pricing for the cheapest model starts at $349.99 and the most expensive one is at $449.99. Pre-orders for the device started on 2 September for the US, with the UK, Australia and Japan getting the Huawei Watch later in October.

Finally we top off the list of the best Android smartwatches with the stunning, luxurious Carrera Wearable 01 from the timeless watch makers Tag Heuer. The company has announced that its first luxury smartwatch will be sporting Android Wear and will be launching on November 9th at an event in New York city. The device is priced $1800, so if you want to impress the world and pamper yourself at the end of the year, you have a tag Heuer to consider!

The current trend of Android smartwatches focus appears to be on the trendy and fashionable persona in you, so buying one of these won’t just make you look smart, but fashionable too. As far as features and usability goes, the smartwatch still has much catching up to do!